Sev can be made in different ways and here I am bringing a very easy recipe to try for this Diwali 2015. This recipe I adapted from a cookbook I have “The Ultimate Collection – A Vegetarian Cookbook. It has lot of interesting recipes. Will try one by one. For now lets get to the making of this Sev.

Jadi Sev is a savory made with just besan. Kara Sev is also the same but they add rice flour to the besan. This is just besan or kadalai maavu with red chili powder, pepper and lime juice along with turmeric. Its so easy to make, not a difficult task & besan is available in everyone’s pantry. Handling rice flour for murukku may be a difficult task for beginners. This is very easy and a quick snack that can be made anytime.

Make this Sev for Diwali. Hope you all will try and let me know if you liked it. 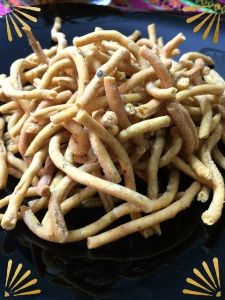 Note :  Adding salt to the besan directly is a bit difficult task for me. So I add salt to the water and make it really salty and then add that salt water to the besan. This makes it easier.

Check the temperature of the oil by putting a small piece into it. It should rise above after being dropped in to the oil.

Don’t over heat the oil – if done then the sev will just become too brown and a burnt smell will come.

Keep the oil at high while pressing the sev into the oil until it becomes a bit hard to flip them and then reduce the flame after flipping them over.

Allow them to cool down completely before storing in an air tight container.

The Jadi Sev is ready and it can be made for this Diwali as a savory. Enjoy your weekend and do try and let me know if it came out well.

One thought on “Jadi Sev”

This site uses Akismet to reduce spam. Learn how your comment data is processed.

Feast to your eyes